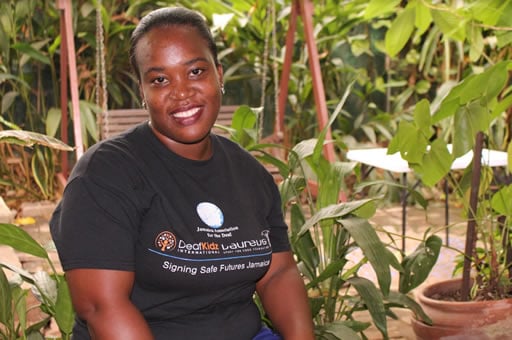 At DeafKidz International we are committed to addressing the outrage of Gender Based Violence (GBV) against D/deaf girls and women. We see GBV as the most socially tolerated human rights violation of our time, deeply rooted in tradition, inequity and ignorance. The cost of the global pandemic of GBV is beyond measure and the physical and psychological toll it takes on individual girls and women is immeasurable. Even more so if you are D/deaf and therefore the lack the means to self-advocate and self-represent; to say ‘No!’ to abuse.

In partnership with Laureus Sport for Good, we’ve been trialling in Jamaica an all D/deaf led response to the challenge of GBV. Over the last two years we’ve worked carefully to develop an approach that is led by D/deaf women and which we now plan to cascade through the wider Caribbean – Barbados, St; Lucia, Antigua – and, in partnership with Islamic Relief Worldwide, to Iraq, Pakistan and Jordan.

At the time the Signing Safe Futures trial commenced in Jamaica, Keshana was engaged in an abusive relationship with her common–law husband. Despite her initial hesitation about joining the programme, Keshana quickly realized its numerous benefits; “When I joined and saw the things that we were learning, I was like yes!…..this can help me” The abuse Keshana received at the hands of her common law husband was both verbal and physical. “He wanted to control me, I couldn’t have friends. He just wanted me there in the house to control me…He would smash my TV and phone and physically abuse me.”

Very simply, Keshana’s life changed when she learnt of Signing Safe Futures and elected to join to train as a Coach. “God chose me to join the project because of what I was going through” she said. “The project made me realize that I could defend myself. That was something I didn’t know before. After learning the martial arts techniques, dance and GBV awareness, I was empowered. When he tried to hit me the second time, I was able to defend myself. This project has given me tools on how to defend myself and know about my life as a Deaf female.”

Empowered and strengthened to realise that the relationship she was in was destructive and unsafe, Keshana decided enough was enough and that she would move out. “The last time he tried to hit me I used one of the techniques I learnt in the martial arts classes to defend myself. He was shocked and stopped the abuse immediately. He realized that I was powerful and never touched me again. The next day, I just left him, I packed by things and told him I was leaving…..he didn’t try and stop me.”

Keshana’s story is typical of the many D/deaf girls and women who experience GBV worldwide. Yet here, as a Coach and leader within the D/deaf community, Keshana has encouraged other D/deaf females to join the Signing Safe Futures programme and to remind them that, both, they have a right to stay safe from abuse and that they should stand up for their rights. “I would encourage them to join the project and many would say that they don’t have the time but I would tell them that I can meet with them privately on their schedule and I would teach them the programme.”

Inspired by Mogul, Oprah Winfrey, Keshana aims to become a great leader especially for young women. “I want people to know that D/deaf women are equal, we have the same experiences, and the same blood. Deaf women are worthy.”

Our experience at DeafKidz International is that due to the sensitivity of the subject, violence against women is universally under-reported. GBV is often shrouded in secrecy and if you lack the language or vocabulary to disclose, as is often the case with D/deaf women, doubly complicated. Survivors of GBV often feel shame and in a number of the cultures within which we work, it is not uncommon for women to be blamed for their own rape. Clinical, social welfare and criminal justice practitioners lack D/deaf awareness and so D/deaf girls and young women fail to access the support they require.

We’re committed to addressing these inequalities and to ensuring no D/deaf girl or young woman is left behind; through our Signing Safe Futures initiative we’re doing just that.

You're viewing a permanent link to a single news item. Check out the News page for the latest updates.
More News »

Sign up to receive a quarterly e-newsletter with updates on DeafKidz International's work responding to the protection, health, education and wellbeing needs of deaf children, young people and vulnerable adults in low resource and complex humanitarian settings.

As part of our e-newsletter, we will update you on the impact of our projects as well as fundraising and volunteering opportunities.